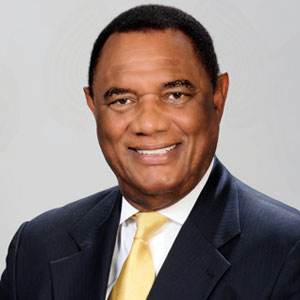 THE “DEAN OF THE CARIBBEAN” TO BE CFATF PATRON
“I am prepared to assume the role of Patron of the CFATF to champion its work with his colleagues within CARICOM and around the world as well as with regional and international institutions.”

In this spectacular sentence, The Right Honourable Perry Christie, Prime Minister, The Commonwealth of The Bahamas, fondly known as the “Dean of the Caribbean” burnished his credentials as a strong and avid supporter of the Caribbean Basin Region and his country integral position in the Caribbean Community.

Ministers, Attorneys General and senior officials attending the First CFATF Regional Anti Money Laundering and Combating the Financing of Terrorism Conference, were delighted at the announcement, which would give a significantly higher profile to the CFATF and a sustained focus on FATF President Valdimir Nechaev’s assessment that “CFATF is without a doubt one of the best in its class”.

Without hesitation and warming to his responsibilities of CFATF Patron Prime Minister Christie called for the establishment of “the CFATF Council of Elders”, “a forum where current and former CFATF Chairmen could meet as circumstances dictate, to review issues facing the organization and its membership, to provide guidance and to undertake strategic intervention to assist in accomplishing CFATF objectives”

Underscoring the importance of high levels of compliance with the FATF Recommendations to the survival of the International Financial Services sector which plays a dominant role in generating revenues for regional governments, the Right Honourable Prime Minister supported the call by the Honourable Allyson Maynard Gibson, Attorney General, Commonwealth of the Bahamas and Chair of the Caribbean Financial Action task Force, (CFATF) for at least seventy five (75) percent compliance at the end of the Fourth Round of Assessments.

And in doing so, Prime Mister Christie immediately drew attention to the increased level of resources that would be necessary to accomplish this goal and pledged his commitment to bring this issue to his colleagues at Heads of Government level.

The Right Honourable Prime Minister’s offer to assume the role of CFATF Patron and his call for the establishment of the CFATF Council of Elders will have to be considered in due course for adoption by the CFATF Council of Ministers, which based on the enthusiastic response thus far, should be positive.

For the full text of  The Right Honouable Perry Christie, Prime Minister, The Commonwealth of The Bahamas