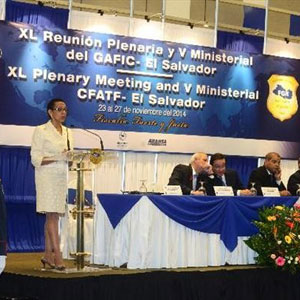 The Caribbean Financial Action Task Force (CFATF) supported the country in a meeting being held here.

The Caribbean Financial Action Task Force (CFATF) agreed yesterday during the 40th Plenary Meeting of this organization which is being held in this country, that El Salvador has complied with the majority of the recommendations to combat money laundering, according to the Attorney General's Office.

"El Salvador as such has been advancing on these issues, we have the reforms approved by the Legislature, now the only thing left for us to do is to put into practice the implementation of all this updated legislation in accordance with international standards", said Attorney General Luis Martínez.

He explained that "with the qualification that we intend to get at this Plenary, El Salvador will be evaluated every two years and in that time we are going to have to demonstrate the ability and experience to be able to combat this type of crime (money laundering), that which we are already doing"

In that sense, "I commend this effort from all in our country, by enacting laws and reforms for the good of the nation, and against money laundering and the financing of terrorism," said Martinez. He added that "El Salvador should be proud of this great achievement".

The country has complied with the 15 Core Recommendations which the referenced international organization had identified to "shield" the country from the possibility of being used for money laundering.

"Very clearly I understand that our country must continue with efforts to improve our conditions in the fight against this crime. I am committed to redesigning and strengthening this enormous task," said Attorney General Martínez.

Among the measures which El Salvador has complied with, stands out the incorporation of Politically Exposed Persons such as the President and Vice-President of the Republic and the ex-Presidents in the Money Laundering Act.

"El Salvador addressed the recommendations with sufficiency and overcame the deficiencies that had been identified in the mutual evaluation report, reaching the level of compliance," says a press report from the Attorney General.

The outgoing CFATF President Allyson Maynard highlighted the efforts made by Attorney General  Martínez, so that the country could have the necessary legislation to combat money laundering "which will result in El Salvador being highly respected in terms of anti-terrorism and anti-money laundering fight.”

She added that "our goal for the CFATF Member States is to obtain 75 per cent compliance at the end of the evaluation of the follow-up process”.
Include the financing of terrorism into the Law.

The CFATF’s eighth follow-up report from last May, questioned that the Anti-Money Laundering Act does not provide "issues related to terrorism and terrorist acts, terrorist groups, and terrorist financing, so that the application of the obligation to report suspicious transactions arising from the financing of terrorism may be difficult”.

Additionally, it is recommended that the Salvadoran authorities make the necessary reforms to the Special Law against Acts of Terrorism in which can be incorporated the obligation for financial institutions to report suspicious financial transactions where there are reasonable grounds to believe that the money or assets are related or could be used for acts of terrorism, or by terrorist organizations, organized crime, drug trafficking, and any of its variants.

In addition that they can inform the authorities of suspicious transactions that might be linked to the financing of terrorism.