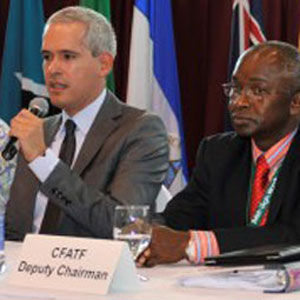 Chairman Manuel Gonzalez described his year as Chair of the CFATF as “an exciting, challenging and immensely valuable experience” during which time he “made new friends and learnt a lot.”

In passing the baton of leadership from his native Venezuela to the Virgin Islands AT Plenary Meeting XXXVI, Chairman Manuel Gonzalez reflected on the advances made by the CFATF during his stewardship at the helm and expressed his appreciation that “to this I owe in large part to the friendship, guidance and good counsel of Chairman Jallow in whose very capable and experienced hands I leave the CFATF.”

Recalling the process of introspection, reflection and reform in terms of its governance and structure which was started by Former  Chair Mrs. Ersilia de Lannooy, Minister of Finance, Netherlands Antilles, vigourously continued under the chairmanship of Mr. Samuel Bulgin, Attorney General, Cayman Islands and fittingly brought to a successful close during Venezuela’s term as CFATF Chair, Plenary XXXVI, was encouraged by the decision by CFATF Ministers given the achievement of agreed goals, to bring the reform agenda to a close, a decision, supported by the FATF Secretariat as “a conscious decision based on good reasons given that the organisation had come a long way in a very short timeframe.”

Plenary XXXVI enthusiastically recommitted the membership to a continuous search for efficiencies in all aspects of the CFATF's operations and warmly welcomed these accomplishments some of which are outlined below:

“These are unassailable, solid and substantial achievements which cannot be gainsaid and of which the CFATF should be rightly proud” noted Chairman Jallow in response.

Chairman Jallow also predicted that “the CFATF family will not rest on its laurels” but is confident of our capacity to address all outstanding issues directly and successfully”.