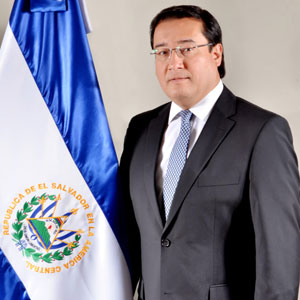 To the unanimous approval and the warmest applause of the Council of Ministers, The Honourable Luis Antonio Martinez Gonzalez, Attorney General was elected to perform the duties of the Deputy Chair of the Caribbean Financial Action Task Force (CFATF) on behalf of El Salvador, for the period November 2013- November 2014.

“As Attorney General of the Republic of El Salvador, I feel very honored by this important appointment to such a respectable body as the CFATF” noted The Honourable Luis Antonio Martinez Gonzalez”.

El Salvador has always held the CFATF in high esteem. By letter to the CFATF Plenary dated January 13th 2003, Honourable Belisario Artiga Artiga, Attorney General, Republic of El Salvador, outlined his country’s interest in becoming a member of the CFATF, which was presented to the Panama City, Panama Plenary in March 2003, by the then Head of the Financial Intelligence Unit.

At that stage El Salvador was already a member of EGMONT and presented to the CFATF Plenary a clear picture of a jurisdiction that was at an advanced stage of building a robust anti-money laundering framework consistent with international standards.

At the Council of Minister Meeting in Antigua and Barbuda on October 23rd 2003, The Honourable Belisario Artiga Artiga signed the memorandum of Understanding and El Salvador was formally and warmly welcomed as the thirtieth member of the CFATF family of nations.

Fast forward to August 2013, Deputy Chair Luis Martinez Gonzalez pledged that he “will assume the post with the confidence that El Salvador will work hand in hand with Madame Chair Allyson Maynard Gibson, and assured the Ministers that he will do everything in my power “to carry out all actions that the position demands of me, with great enthusiasm and fortitude”

In response to Deputy Chair Martinez Gonzalez’s generosity of spirit, Madame Chair Maynard Gibson  confirmed that “In implementing my Eleven Point Action Plan, I will have the valuable support of Deputy Chair the Honourable Senor Luis Antonio Martinez Gonzalez, Attorney General, El Salvador who, with the support of all our Spanish speaking Members in Central and South America, will act as the bridge between the CFATF and the Members of our sister FATF Style Regional Body, GAFISUD with whom we have had and will continue to have, strong and fruitful cooperation in terms of translating documents, participating in Mutual  Evaluation Missions, undertaking Joint Typology Exercises and engaging jointly in outreach to relevant national and international organisations operating in our hemisphere.”

One project that will immediately attract the attention and energies of Deputy Chair Martinez Gonzalez will be to explore with GAFISUD, the furthering of an idea advocated by Executive Director Wilson at the April 2013 Doha, Qatar meeting between EGMONT and the Secretariats of the FATF and FATF Style Regional Bodies, for the establishment of a Heads of Financial Intelligence Units (FIUs) Forum for the Americas.

In pursuit of this hemispheric wide agenda particularly as it relates to identifying new methods and trends being used by trans-national organized crime, Deputy Chair Martinez Gonzalez, demonstrating an acute insight into and appreciation of this pernicious saga, noted that “Money laundering, worldwide makes crime profitable, by allowing criminals to hide and legitimize profits from illegal activities, -these illicit funds allow them to finance a variety of other criminal activities, - more so, it is worrisome that this illicit practice corrodes the economy and governments, it promotes corruption, it distorts economic decision making, it aggravates social problems, it threatens the integrity of financial institutions  and strikes at the development of the population.”

“It is very reassuring to share leadership responsibilities of the CFATF with a partner who is as knowledgeable, passionate and committed to the protection of the Caribbean Basin Region as Deputy Chair Martinez Gonzalez,” said Madame Chair Maynard Gibson, I am extremely confident, she continued, “that the future of our organization is in very safe hands”