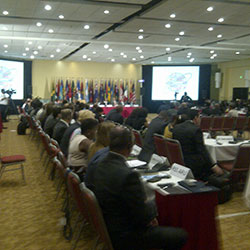 The high level Plenary Meeting will see over 10 Attorney Generals and Ministers of Government from across the region in attendance. The Honourable Faris Al-Rawi, Attorney General, of the Republic of Trinidad and Tobago and current CFATF Chairman will facilitate discussions during the Plenary Meeting with regional Ministers, and senior public sector officials and other delegates from around the world; on measures to battle money laundering, terrorism financing, corruption and other
financial crimes across the Caribbean basin.

The Honourable Fayval Williams, Minister of State in the Ministry of Finance and the Public Service is expected to deliver a special address at the opening ceremony scheduled for Wednesday, June 8, 2016. Mr. Brian Wynter, Governor of the Bank of Jamaica will give opening remarks.

The Government of Jamaica (GOJ) through the Financial Investigation- a Division of the Ministry of Finance and the Public Service-, the Counter Terrorism and Organized Crime Branch of the Jamaica Constabulary Force and the Major Organized Crime Agency (MOCA); as well as, other agencies and departments continues to identify and implement measures to bolster Jamaica’s fight against financial crimes.

As such, the GOJ is pleased to host the CFATF Plenary Meeting for a second time, reflecting the GOJ’s commitment to strengthening regional collaboration.

The Honourable Faris Rawi, Chairman of the CFATF expressed that, “the area continues to be a high priority for the Caribbean region and as such, the CFAFT continues to push for timely implementation of initiatives that will strengthen the regions ability to successfully combat lottery scamming; and other related crimes that threatens the integrity of financial systems across the Caribbean territory”.

The CFATF is an organisation of states and territories of the Caribbean basin which have agreed to implement common counter-measures against money laundering, terrorism financing and the proliferation of weapons of mass destruction. The main objective of the CFATF is to achieve effective implementation and compliance among membership with the International Standards issued in this area by the Financial Action Task Force (FATF). The CFATF is an Associate member of the FATF.

The CFATF was established as the result of two key meetings convened in Aruba during 1990 and Jamaica in November 1992 which is embodied in the Kingston Declaration.
In November 1996, 21 members of the CFATF entered into a Memorandum of Understanding which now serves as the basis for the goals and the work of the CFATF. In this document, CFATF members agree to adopt and implement the 1988 UN Convention Against Illicit Traffic in Narcotic Drugs and Psychotropic Substances; and to adopt and implement any other measures for the prevention and control of the laundering of the proceeds of all serious crimes as defined by the laws of each Member.